This is the first setup that used the full area of the 700×1000 back-projection screen and cyanotype paper. This allows for larger, and potentially more complex, arrangements, and accommodates the longer winter shadows. 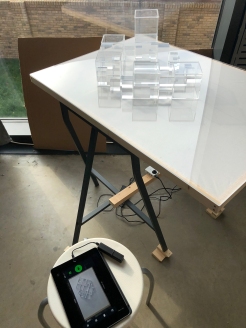 The filming apparatus is angled slightly to shorten the lengths of the acrylic arrangement’s shadows.

I have been experimenting with using different blending modes on the overlaid footage of different days’ shadows.

When reviewing the days of time-lapse footage I realised that in one of the night-time periods there was a full moon and the moonlight produced shadows on the screen. The moon itself is also visible in the imagery. As it was low light footage there is a lot of visual noise, different in each frame, thus producing a “static” effect to the moving image.

I have also been considering how to further use the setup and takedown footage to emphasise the perforative aspect of this work.

The above versions of the setup and takedown footage use the subtract blending mode on a layer of footage with each block being put into position, over the top of footage of the arrangement with no hands. This inverts the image and minimises the visual impact of the acrylic blocks, and emphasises the motion of the hands.

These are the three cyanotype prints made from this arrangement. 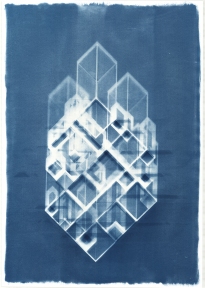 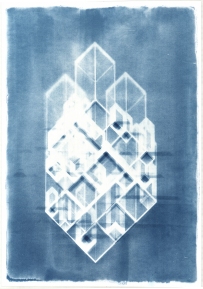 Due to the large size of the paper I didn’t have a tray large enough to develop the print, so I used the studio shower. 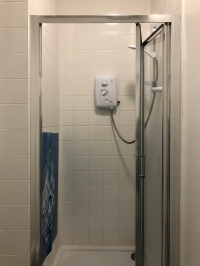