The process of setting up the arrangement starts the same as the previous one, with the positioning of a single 100mm cube bottom centre, then joined by a second which is pulled away and spaced with a 50mm cube. However, in this case the smaller cube is not left in place but used to position a second and then third larger cube, to form a grid of four cubes, spaced apart by half their own width. Extra cubes and hollow blocks are placed within and on top of these four original cubes.


A single day of shadows.
Taking down the arrangement. 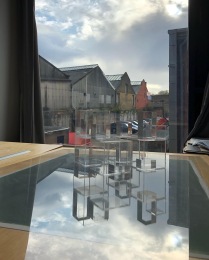 I only made one cyanotype print of this configuration as I was not particularly happy with the balance of the image – the use of the solid acrylic blocks on top of the hollow cubes makes the resulting shadow drawing a little top-heavy. This print was also not particularly successful as the cubes moved during the exposure, and then I left it in the washing water for too long, losing some of the blue and leaving the darker “bubbles” where parts of the print was out of the water.