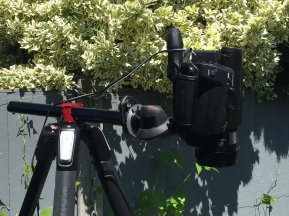 My new Sony FDR-AX700 camera on (also new) Manfrotto tripod with horizontal arm, allowing the camera to be positioned away from the centre of the tripod and avoid the tripod shadows from the frame.

Filming outside means contending with the elements, in this case the wind which moves the lightweight polystyrene “towers”.

The imagery was not particularly successful as it is still clearly perspectival, despite the distance of the camera from the model and the zoom lens this wasn’t sufficient to flatten the image into something resembling a plan view.