For this arrangement I have moved to using the small acrylic boxes that I have been using to make smaller cyanotype arrangements – I now have enough of these boxes to make larger, more complex arrangements on the 700×1000 back-filming apparatus. The arrangement process starts with an edge to edge placement of the larger size of box, and then, as there was not enough boxes to fill the screen, I removed and relocated some boxes to extend the area covered by the whole composition. Many of these gaps were filled in by the smaller boxes. 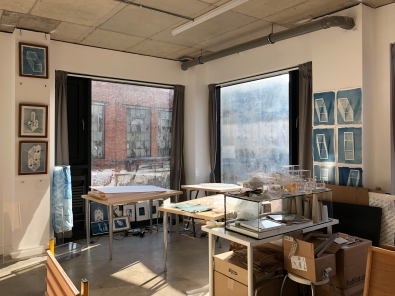 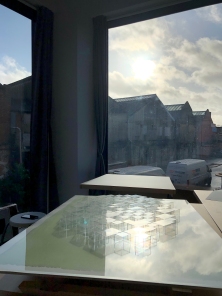 Studio view with filming apparatus in the window. Cyanotype exposure in progress.

Further modifications to the filming apparatus include using brackets to fix the rice paper screen to the trestles, including using these brackets to form the angle to the sun at this point, rather than raising the trestle legs on timber offcuts.

Rather than dismantle the arrangement in a controlled manner, I decided to “mess” it up, to produce a disordered arrangement using the same boxes. The clip above shows that even this process of supposedly making a mess involves a degree of control, decision making and composition.

Three days overlaid of the shadows of the disordered arrangement.

The clip above shows the acrylic sheet with the block arrangement being lifted off the back-filming apparatus, so that it could be used to make the cyanotype prints.

The clip below overlays the three days of filming the ordered arrangement with a scan of one of the cyanotype prints. 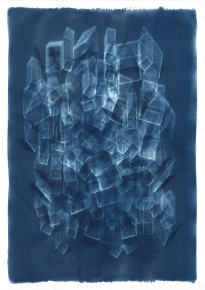 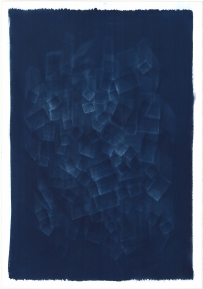 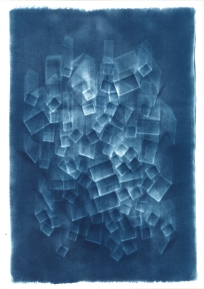