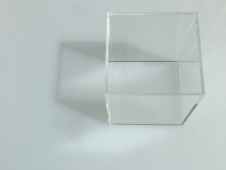 I set up a filming process for the acrylic cube utilising “opal” perspex (normally used for light-boxes) as a base to receive the cube’s shadows, which I could film from underneath.

In this first capture of the cube’s moving shadow the occasional obscuring of the sun by passing clouds flickers the sharp wireframe axonometric image of the cube in and out of existence. While the subversion this provides (of the otherwise potentially rather instrumental imagery) is enjoyable, for the next attempt I filmed over several days, and then overlaid footage from three days (using the overlay blending mode in Premiere) to ensure there was a continuous projection of shadow of the cube.


The resultant clip contains the flickering of the clouds that cover the sun in each of the three layers. This emphasises the “drawn” quality of the imagery, which is reminiscent of rotoscope animations – the technique actually utilises a form of the rotoscope method of image projection of real-life footage to trace into drawn animation frames. In this case, the “real-life” projection is an indexical projection of the original object (the cube), rather than an already mediated film image. The “tracing” is performed by the camera rather than the human draftsperson.

This technique has emerged from my work with cyanotype printing of shadows of objects, in particular an interest in the axonometric projection achieved by this work.