Making Representations was a three-day project which ran from 27 February – 1st March 2019, in the Phoenix Studios North Gallery, Brighton. The project culminated in a half-day symposium followed by a public exhibition opening, and included five artist-researchers – Bill Leslie, Eleanor Suess, Charlotte Warne Thomas, Katie McCallum, Felicity Hammond and Dean Kenning, whose work all touches on questions of representation – architectural, filmic, mathematical, linguistic and photographic. The symposium consisted of performances, workshop activities, and concluded with a discussion of wider issues of representation.

My contribution to the exhibition included a new, site responsive work, titled “Phoenix Gallery Timeframes” which focussed on the relationship between representational artefact and architectural space, and the viewer’s agency in both. Over the first two days of our residency in the gallery I constructed a 1:20 scale model of the main gallery space, and set up small video cameras to record the space within the model, including the change in natural light and the real space of the street beyond the windows.


Two day time-lapse showing the construction of the 1:20 model of the gallery. 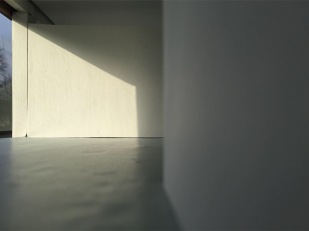 For the exhibition, the 1:20 model remained in position, with its back wall opened up so that visitors could see inside the model, including the small cameras which inhabited the model.

The time-lapse footage recorded by the miniature cameras over the previous day was shown on analogue box monitors (with digital media players providing the video source) positioned around the gallery. 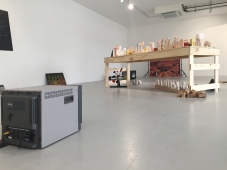 A real-time feed from one of the cameras was shown in the adjacent room. The imagery on the screens and projector was ambiguous as to its depiction of a “real” space vs a constructed representation – the inclusion of real lighting and street view contributed to this sense of ambiguity. The inclusion of the scale model in the main gallery space allowed viewers to make the connection between the three-dimensional scaled space of the model, and the flat, but moving imagery on the screens.

The exhibition audience demonstrated a high level of engagement with the scale model and live projected feed from the camera within the model. In particular, children discovered that they could insert their hands in the space between the model and the window, resulting in the “giant” hands appearing in the live-projected model view.

For the symposium, Bill Leslie and I undertook a workshop with participants making films using a combination of Bill’s sculptures (made to be filmed), Felicity Hammond’s montaged “backdrops”, and a collection of my own “found objects”. Participants were able to experience first-hand the translation of scaled artefact (sculpture/object/image) into a new spatio-temporal construction though the act of filming, and viewing the new films. 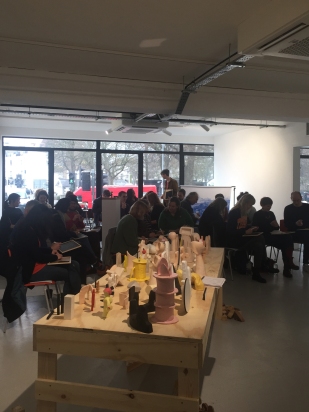